15 Signs Your Teen Is Using Drugs

Is your teenager doing drugs? Are they drinking? Teens are a source of worry for every parent. You look after them for years, and you hope that they end up turning our alright.

It’s clear that drug education does a lot for some and little for others. Indeed, government-sponsored drug education programs tend to be somewhat weak. It’s therefore vital that you watch for the common signs of drug use in your kids.

15 Warning Signs of Teen Drug Use: 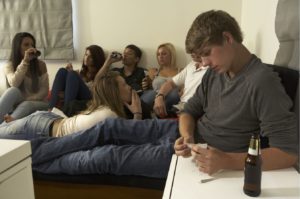 1. Possession of the drug itself is a dead giveaway. While marijuana is fairly distinctive, how do you tell whether a pill has been prescribed or not? The Internet is usually a good resource. Look for the symbol on the pill. Something marked OP will likely be OxyContin, for example. Identify the pill and see what comes up. Alternatively, ask your teen.

2. Odd smells are another sign. It could be a new interest in deodorant or a heady smell of marijuana-laced smoke. If you don’t know what marijuana smells like, it’s time to educate yourself. We don’t suggest smoking it yourself, but you may be able to ask a friendly cop to show you a sample.

3. Paraphernalia for drug taking include roll-ups and tin boxes. For other drugs, it could be syringes and burnt teaspoons. If you see a tin box, open it and take a sniff. If it smells like tobacco, it probably is. If it smells of something else, ask your kid about it.

4. Rapidly changing grades are one of the common consequences of drug addiction or use. If you kid goes from being a straight-A student to getting F’s or D’s, something’s changed. Of course, it could be linked to a number of factors, so tread carefully here.

5. Glazed expressions may be a sign of addiction, but with some teens, it’s hard to tell. Teenagers and twenty-somethings tend not to be the most communicative of creatures, but if your kid starts looking stoned all the time and are accompanied by any of the other factors listed, it’s entirely possible he or she is stoned.

6. Abandoning friends is quite common throughout the teenage years, but it could have a more sinister implication. If your kid starts hanging out with a different crowd who smoke and so on, it could be a phase, but it could be linked to drugs.

7. Abandoning social activities is another potential sign of drug abuse. Again, interests change throughout your kid’s formative years, so tread lightly. It might just be related to a change of tastes.

8. Evasive answers to questions of where your kid has been can sometimes be linked to drugs. As a parent, you’ll never know all the aspects of your kid’s life, and sometimes it could be related to your kid’s interest in dating.

9. Behavioral changes are quite common with kids who take drugs. While the moody teen is a stereotype, it’s one that holds true. If your kid is jittery in the morning and calmer in the evening, he or she could be taking drugs.

10. Memory problems sometimes herald drug use. While everyone forgets stuff, if your kid has problems remembering basic things, you might need to question further. Of course, it could also be a sign of medical issues, such as ADHD.

11.Unexplained injuries can be related to drug or alcohol use. Just as above, however, they could also be related to medical issues or even bullying.

12. Items or money going missing around your house might mean that your kid is stealing to fund a habit. Keep an open mind, however, as it’s just as likely to be a partner or someone else stealing them.

13. Weight changes are a normal part of teen life, but rapid fluctuations could indicate an addiction. Some teens neglect to eat due to drugs or spend lunch money on an addiction rather than eat.

14. Your child is more likely to get ill if he or she takes drugs, as the side effects of some drugs partially suppress the immune system. Inhaled drugs can also lead to respiratory problems.

15. Staying out late is a typical teenage habit, but in combination with things listed above, it’s possible that this could be an indication of drug abuse. Of course, it’s most likely that the drug of choice is alcohol in this case.

Are you concerned about your teen’s drinking? Are they using drugs? Have you exhausted your local resources? Contact us to find out if residential therapy is right for your teenager. Also learn more about parent choices and tips for researching schools and programs.