This is one of the most common complaints we hear from parents today. Today’s teen has zero respect for authority – it’s not like generation’s earlier. When our parents told us to come home at 10pm, there was never a question – we were actually home ten minutes earlier! 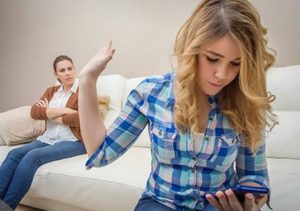 Backtalk? We wouldn’t dream of it, unless we enjoyed the taste of soap – or a good whipping! Yes, I said it. I’m not saying any of us were abused, I’m only saying our parents were allowed to discipline us – and we learned respect very early in our tween-age life.

-Are you tired of your teen swearing at you?
-Does your teen ignore you when you talk to them?
-Is your teen rude to you, especially in front of others?
-Are they destructive to your home?
-Are you at your wit’s end with the door-slamming and possible destructive behavior?

Is your teenager disrespectful?

Not all teenagers are rude or disrespectful, but disrespect is a common part of teenage growth and development.

This is partly because your teen is expressing and testing independent ideas, so there’ll be times when you disagree. Developing independence is a key part of growing up. It’s a good sign that your child is trying to take more responsibility. But your child is also still learning how to handle disagreement and differing opinions appropriately.

Also, your teen is trying to balance their need for privacy with your need to stay connected and show you care. So sometimes you might get a rude or disrespectful response because your teen feels you’re taking too much interest in what they’re doing or invading their space.

Your teen’s moods can change quickly too. Because of the way teenage brains develop, your child can’t always handle changing feelings and reactions to everyday or unexpected things. And this can sometimes lead to over-sensitivity, which can lead in turn to grumpiness or rudeness. Teenage brain development can also affect your child’s ability to empathize and understand other people’s perspectives, including yours.

Teenagers are also starting to think more deeply about things, so they can have thoughts and feelings they’ve never had before. Some young people seem to have a conflicting and radical view on everything, and might question previously held beliefs. This shift to deeper thinking is a normal part of development too.

And sometimes teenagers are disrespectful because they think it might be a way to impress others, or because they’ve seen their friends behave this way.

Arguing rarely works for parents or teenagers. When we get angry, we can say things we don’t mean. A more effective approach is to give yourself and your child some time to calm down.

If you’re angry or in the middle of an argument, it will be hard to calmly discuss what you expect of your child. A more effective approach is to tell your child that you want to talk, and agree on a time.

Being defensive is very rarely useful. Try not to take things personally. It might help to remind yourself that your child is trying to assert their independence.

Even though you have more life experience, lecturing your child about how to behave is likely to turn them off listening. If you want your child to listen to you, you might need to spend time actively listening to your child.

Nagging isn’t likely to have much effect. It might increase your frustration, and your child will probably just switch off.

Sarcasm will almost certainly create resentment and increase the distance between you and your child.

Do you feel like you are constantly walking on eggshells in your home? Is your teen quick to anger? Do they yell at you? It might be time to consider professional help with a counselor to help learn coping skills. It could be more than disrespectful behavior, there could be underlying mental health issues that need to be addressed.

Have you exhausted all your local resources? Do you feel like you’re a hostage in your own home — are you at your wit’s end?

Read: Where to Send My Troubled Teenager.

Contact us today for a free consultation about the benefits of residential treatment for defiant behavior in teenagers.