What does it mean if your teen displays a gothic lifestyle? Is your teen gothic?  It can be a popular trend for teens and some parents can be disapproving of it, however it’s important to understand it.

The term “gothic” generally refers to an attitude and a lifestyle among many of today’s young people, but it manifests in a certain type of fashion and music that displays a dark attitude and outlook on life.

This doesn’t necessarily mean it is wrong or bad.  Like with many lifestyles, it depends on the person and their way to express themselves in a healthy way.

How does a goth teen typically express themselves in their clothing and otherwise? 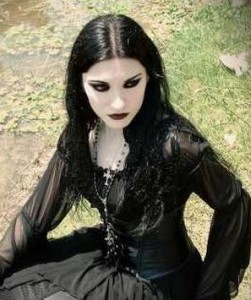 Generally, the gothic attitude is one of sadness and depression, but this is not always the case. Typical goth teens will listen to Marilyn Manson and that genre of music.

As much as having a goth teen is about picking issues, there has been a cause for concern after the release of a study.

The study on teens who identify as goths are at greater risk of depression and self-harm.

Young people who identify with the goth subculture might be at increased risk of depression and self-harm, according to new research published in The Lancet Psychiatry journal.

With this research, it doesn’t mean you should force your child to change, it is about giving you an awareness to their emotional health.  As with many parts of adolescence, we hope that our teens will grow out of trends that they are experimenting with if you are not accepting of it, especially if it is harming them.

Goth is not dangerous if they are simply expressing their personality, however if you find they are sinking into a dark hole, becoming withdrawn, secretive and other signs of depression – it is time to reach out for help.  Especially if you discover your teen has scarring or fresh marks from cutting (self-harm), get help immediately.

Keeping your lines of communication open is imperative.  Learn as much as you can about the goth subculture.

If you believe your teen has developed an unhealthy relationship with goth behavior and you’ve exhausted your local resources for help, please contact us for information on the benefits of behavior modification programs.