What can parents to do to help their tween and teen?

There’s no app for parenting teens online today—yet according to a recent PEW Research survey, 95 percent of teens have access to a smartphone while almost half (45 percent), claim they are online constantly. That’s up significantly from the last survey in 2015 when it was 24 percent. 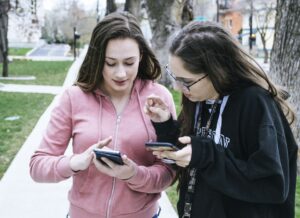 A national survey conducted by Screen Education finds that teens are so troubled by their smartphone addiction that they want to reduce their screen time.

This is a small portion of the results of the Screen Education survey.

According to the research, although teens want to take a break or even stop using their smartphone, they soon realize it’s not possible. Many engage in what the Screen Education survey noted as “cycling.“

Can schools and parents help?

Teens have always been a challenge whether we are a generation of technology or our parents’ world with rotary phones and busy signals, however what hasn’t changed is the fact that young people need and want boundaries.

The Screen Education survey revealed that 67 percent of teens attend schools that ban smartphone use during class and over half (53 percent) are grateful for this. Forty-one percent of teens admit that their addiction to smartphones is hurting them academically. Over a quarter of teens (26 percent) wish that someone (either their parent or school) would impose reasonable screen time limits on them.

What can you do to reduce screen time?

How will you start your digital detox?

Also read: How to Change Your Teen’s Tech Habits.

If you are struggling with your teenager’s internet addiction and have exhausted your local resources, learn more about how residential treatment can help your teen develop a healthy relationship with technology. Contact us today for a free consultation.