How to Prevent Teen Internet Addiction

“My teen is addicted to the internet!”  How many parents struggle with their teen’s addiction to their cell-phone (internet) and specifically social media platforms?

This is a growing concern not only in families, but with educators and therapists. Excess screen-time has been linked to causing an increase in teen depression, anxiety, stress and even self-harm or suicidal ideation.

Did you know, approximately 95% of teens have their own smartphone and 88% have access to a computer at home? How can we prevent teen internet addiction after the train has already left the station? 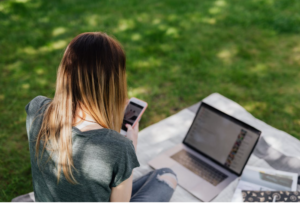 -Constantly checking their phone, always online?
-Get anxious when they don’t have their phone?
-Will become angry or even enraged if you remove their device?
-Are drifting from real life friends?
–Withdrawing from family?
–Isolating in their room for hours?
-Seem depressed, sad or stressed?

Managing your teen’s screen-time can be challenging but it’s also necessary in today’s digitally driven world. The fact is, technology is here to stay and we must teach our children to have a healthy relationship with technology including their social media platforms.

Why Early Prevention of Internet Addiction Is Necessary

When did you give your child their first device? There is a reason why top Silicon Valley executives are saying no to the smartphone until at least 14 for their children. In fact, there is a long list of reasons and parents need to know them.

Wait Until the 8th  invites you to learn more about why parents should consider waiting until their child is at least 14 years old before giving them a cell-phone.

New research shows dependence on your smartphone may produce some of the same addictive brain responses similar to alcohol, drug and gambling addictions. Smartphones are like slot machines in your children’s pocket constantly persuading them to crave more. The tech industry intentionally designs smartphone apps and social media for people to use for long periods of time because this is how they make their money.

Smartphones are an academic distraction

Elementary and middle school years establish the foundation for your child’s academic success. Children learn how to productively manage time, projects and homework. Introducing a constant distraction with a smartphone is paving a path for academic mediocrity.

The early results of a landmark study on brain development by the National Institute of Health show children who spent more than two hours a day looking at a screen got lower scores on thinking and language tests. Research from the University of Texas suggests the mere presence of your smartphone reduces cognitive capacity and test-taking brainpower. One study demonstrated that using smartphones in classrooms can even lower a student’s grade. Another study found that children who attend schools with smartphone bans did better on tests. 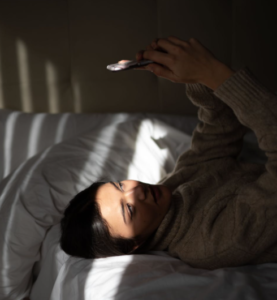 Studies show that the use of smartphones and other portable devices with screens affects the quantity and quality of sleep in children and teens. Adolescents are likely restless because they anticipate receiving texts and social media messages from friends, which affects their nighttime routine.

Some children even wake up in the middle of the night to check texts or social media. Sleep disturbance in childhood is known to have adverse effects on health, including poor diet, obesity, weakened immune system, stunted growth, and mental health issues.

Smartphones increase the risk for anxiety and depression

Children are not emotionally equipped to navigate tricky social media waters at such an early age.  Viewing someone else’s highlight reel on social media often leads youth to think they are missing out or are not enough compared with their peers. Research shows that the more time someone uses social media the more likely they are to be depressed. A Harvard Business Review showed the more you use Facebook the worse you feel. Another report demonstrated that adolescents’ psychological well-being decreased the more hours a week they spent on screens.

In addition, when children overuse technology, the constant stimulation of the brain causes the hormone cortisol to rise. Too much cortisol can inhibit a child from feeling calm. The loss of tranquility can lead to serious anxiety disorders.

Suicide rates are on the rise especially for girls between the ages of 10 and 14 years old. For this age group, suicide rates have tripled over the past 15 years.

Read more reasons on why parents should wait to give their child a smartphone.

It’s no secret, parents are at their wit’s end while their teen (or tween) are hooked to their devices. We are now at a point where if a parent attempts to remove (or even threatens to remove) their phone, they risk a firestorm in their home. We’ve talked to parents that have experienced property damage (holes in walls), their child that will self-harm, become explosive, rage and more — when their smartphone is removed.

Here are some ways to try to take back control:

1. Smartphone contacts:   Cell-phones are a privilege, not a right.

It’s never too late to create a smartphone and device contract with your teenager. Another example of a contract is a technology agreement, courtesy of Cyberwise. This contract and/or agreement outline the expectations of the parents, as well as the rules and responsibility of using their smartphone. With this the teens/kids have a clear understanding of the guidelines for using the phone and consequences when they break the rules.

2. Modeling smartphone behavior:  Do as I say, and as I do.

Many experts say it’s not only about monitoring but more about mentoring – reality is, it’s more about parents MODELING smartphone behavior. These teen’s already have their heels dug in. Mom and dad need to start modeling good digital behavior. For example – if you are a parent that is constantly checking their text messages or on social media, what message is that sending your child? If you bring your phone to the table for mealtime time, what example does that set? When speaking to your friends, are you also glaring at your screen? Do you leave distasteful comments online, do you overshare on social media? Do you text and drive?

Studies has shown, you are your child’s biggest influence. It’s time for parents to rethink how they use their smartphones too. 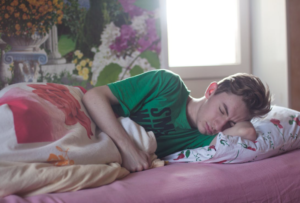 It’s time to purchase a lockbox. A simple purchase that can literally change your teen’s life and help them develop healthy sleeping patterns again.

How many times have you awoken to your teen scrolling down their screens at 2am? 3am? It’s not enough anymore to simply say it’s 10pm time to turn-off your phone. Whatever time you have designated in your contract/agreement — is the time that phones are locked-up until morning. Having a good nights rest not only will improve mental wellness, it will likely help your teen’s academic performance and overall mood.

Is your teen struggling with internet addiction or smartphone addiction? Have you exhausted your local resources? Contact us to learn more about residential treatment and how can benefit your teenager.